Mistress tramples her accountant with sneakers

This mistress was not pleased with how her accountant kept her books of account. She had to punish him so that he did his work meticulously. She did not want audit queries and that is why she did what she did. She even went ahead to undress him and then trample him so that he learned she meant what she said. He promised to do his work better than he had been doing.

Mistress Lilly wanted to find out whether her slave was a sissy so she used her sneakers to test him. She used them to trample him and she watched out for his reaction to what she did. The mistress did not want to use heels because she knew they were very painful and the average person could not withstand the pain of her heels. But sneakers were a different story altogether.

Mistress Imane found out that this loser was lazy and she did not want anything to do with such a person. She had to do whatever was in her power to ensure it did not happen again. So the mistress chose to use her sneakers to trample the shit out of his hands. It was very painful for him and he regretted what she did to him and he begged for mercy.

When madame Marissa noticed that this loser was not going to heed her instructions, she chose to make him cry because she felt that tears would make him gain a good perspective. So she used her sneakers to trample him and make him learn who she really was. He was shocked but the good thing for her is that he learned to fear her and do what she asked him to do.

Princess Serena shows slave what she can do with her sneakers

Princess Serena watched as her slave doubted her ability to enforce strict discipline in her house. She warned him for the last time that she could do damage with only her sneakers but he did not listen to her or even believe her. So she proved what she was saying by crushing and trampling him with her sneakers. He cried and was in the pain of his life as she did her thing.

These mistresses did not like what they had seen this loser do. They had caught him jerking off in public and in their neighborhood and they did not want such a guy. The mistresses chose to do what they had never done before which was to lure him to their house and they trampled him with their sneakers. They even took selfies while they trampled him and warned him never to do that again. 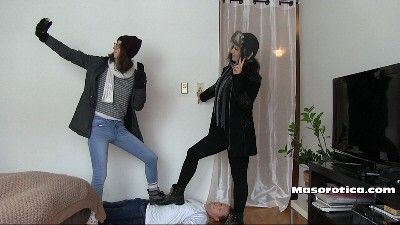 Mistresses stomp on guy for being irresponsible

These mistresses wanted to humiliate this loser and they did it by stomping on him with their sneakers. He was meant to be dominated and the mistresses did not have any mercy on him. He was forced to endure the pain and humiliation of a lifetime but then again he realized he had brought it all on himself by being irresponsible. In short, he had himself to blame for what happened to him.

Mistress Jenny is so good at sneaker trampling guys that she has built a name for herself. She is known as the sneaker trampler. Many people who want to have someone punished usually pay her to do it for them and that is what happened today as she took over the responsibilities of torturing this guy. He had no clue what he had gotten himself into. She had fun trampling the guy as well as getting paid for it.

Mistress uses pain to have her way

This mistress used her sneakers to inflict pain on this loser. She had caught him messing around and she knew she had a strong case to punish him. But she did not choose to use any severe method to punish him. She used him as her guinea pig as she tried trampling and skating. She had him endure the brunt of her humiliation and trampling before she proceeded to where she wanted.

Mistress tramples with her sneakers

This mistress was angered by the things she had heard this loser say about her. She did not know him well but he spoke about her with certainty and finality as if they had known each other for decades and he was a close confidant of hers. But it was all a lie and she was not going to let it stand. She crushed his nuts with her sneakers and he corrected the lies himself.